Onofrio Vitullo was born on July 26, 1945 and served in the US Navy for six years from 1968 until 1974 achieving the rank of Second Class Petty Officer.

Although he is not of Portuguese descent, Mr. Vitullo has been instrumental in our Portuguese Day Parade. Each and every day his tireless efforts ensure everyone’s safety in our city, our homes, our church, our club and of course on our Parade Route. 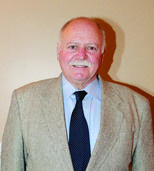