Vito Tropeano was born and raised in Elizabeth, New Jersey and is the son of Angelo Tropean of Avelino, Naples and Rosalia (DiBella) Tropeano of Palermo, Sicily. He is also one of six children: sister, Virginia; brother, Michael; brother, Joseph; sister, Paula; and brother, John. He credits his parents for instilling in him the family values he holds so dear. He and his beautiful wife, Denise, have two children: Daniela (12) and Vito Angelo (9). Albert Einstein once said, "Only a life lived for others is a life worthwhile." Detective Vito Tropeano is no stranger to these words as he lives by them each and every day both as a son, husband, and father to his family and as a trusted friend and police detective to the community. Aside from his role as a father to his two children, he finds there is no job more fulfilling than of being of service to others.

It was his desire to help others that prompted his career in law enforcement with the Elizabeth Police Department (EPD), which began after he graduated from the Union County Police Academy in June 1991. During his more that 20-year tenure with the EPD, he has been assigned to a wide range of duties including the Walking Patrol Unit, Community Police, Patrol Division, Traffic Division and the Crime Prevention Unit. He was promoted to Detective in 2000 and currently heads the Community Relations Division, a post that he is most proud of because it puts him face to face with the residents of Elizabeth. It helps him to get to know the people he vowed to protect and makes his job all the more meaningful.

In 2003, he started a City of Elizabeth Task Force which is multi-faceted consisting of the EPD, Elizabeth Fire Department, the Health Department, Construction Division, Animal Control, and the Public Works Department. His priority is and has always been working for the good of others and it has paid off in many ways. Besides the personal satisfaction that he gets from his work, he has been recognized and honored for his dedication. For example, he was awarded the Union County Christopher Columbus Cultural Heritage Award in 2006. ln 2009, he was honored for his exemplary work ethics by the White Rock Baptist Church.

Detective Tropeano is also a proud member of the PBA Local #4, the Knights of Columbus #253 and Partners of Hope for St. Jude Children's Research Hospital. During his spare time, he enjoys coaching Little League Football, Basketball, Baseball, and Softball. With all that Vito does in his personal and professional career he manages to find time to help the Portuguese community. The title of Honorary Marshal was created in order to recognize individuals who are not of Portuguese descent or not of our community, who leave their mark on our community. This is exemplified by Vito Tropeano who always pushes to make sure we're well taken care of. 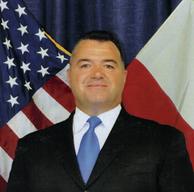